RS-485 Implementation on an Arduino

The RS-485 allows to implement a low-cost network for several devices. The aim of this post is not to copy the information gathered by Wikipedia regarding RS-485.

The RS-485 is a half-duplex protocol, so this means that its devices cannot listen and speak at the same time. The RS-422 is a protocol based on RS-485 that allows this.

Anyway the RS-485 allows to connect several devices with only 3-wires:
Some devices mark the Data+ and Data- as B and A. I prefer to call them Data+ and Data-, because this is how they are driven and most PLC manufacturers call them so.

Its important to use the GND wire to make use that Data+ and Data- are refered along the network.

It is important to add bias 120 ohm resistors between Data+ and Data- at both edges of the network, when designing bus type networks. In star type networks, I use to install them on the longest arms.

How to implement it on an Arduino 328

The MAX485 family is a very popular set of RS485 transceivers, but there are others like those from Texas Instruments or Linear Technology.

An RS-485 typical transceiver consists on the next pins: 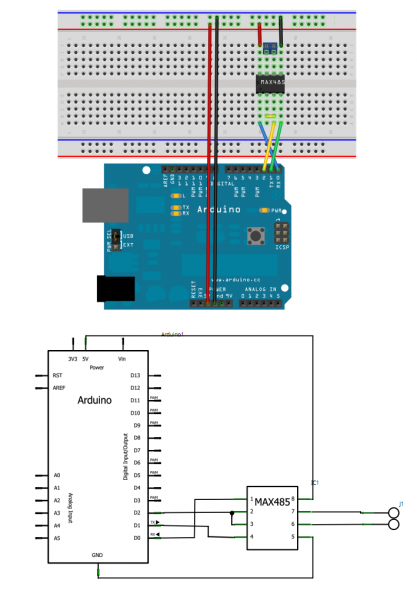 This schematic is borrowed from here.

This is the simplest implementation for RS-485 on an Arduino. Its only drawback is that RO interferes with the USB transceiver, unless D2 is at High level to put RO at high impedance.

The UNO and duemilianove include a 10K-ohm resistor in series between D0 and the FTDI chip to allow to mount other devices to the UART. Unfortunatelly the USB port is lost, unless reprogramming the Arduino.

The Modbus library implements the RS-485. One of the Modbus constructors is declared as:

u8txenpin may be an Arduino pin number different of 0. If so, this pin handles the transceiver flow control pins RE/DE. This is automatically done by the Library.

The Modbus library includes an example for an slave:

The slave contains an array au16data, which is available in the RS-485 network either for read or write. Pin 2 is used for the RS-485 flow control.
Posted by suby at 20:32